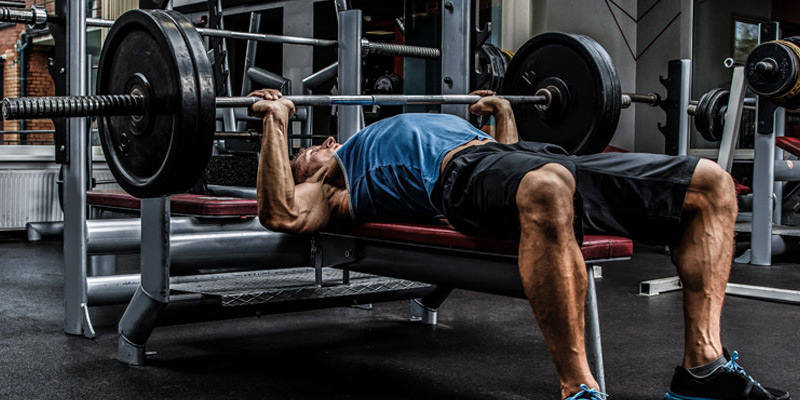 Building a bigger chest ranks near the top of every guy’s list of training goals. So much so we’ll oftentimes go the extra mile in our eagerness to push past ordinary limits. So which of these approaches have you tried on chest day?

If you’re like me, you’ve tried an all-of-the-above approach … with little to show for the effort.

But maybe you’ve simply been looking in the wrong places. Today I’m going to show you outside-the-box techniques that can resuscitate long-stalled gains in pec strength and development. It all starts with an examination of guys who make it their business to push past plateaus in chest strength: world-class benchers and powerlifters.

Have you ever noticed the lower portion of the bench press is the hardest? Toward the end of your set, a spotter will give you a little help with the bar just off the chest, and from there you press to full arm extension. The so-called sticking point at the lower end of the range of motion (ROM) is a result of biomechanics, and it’s where you’re typically weakest.

The barbell bench press and squat are good examples of exercises that follow ascending strength curves – that is, you have less-favorable leverage at the bottom and it becomes more favorable toward the top. Every exercise has a strength curve, which depicts how much force (strength) you can produce at various joint angles throughout the movement’s ROM. For simplicity, think top, middle and bottom of each movement.

Movements with ascending strength curves feel easier as you near full extension (lockout). The muscle tension required decreases over the course of the movement arc. Conversely, exercises such as rows and leg curls with a descending strength curve feel more difficult as you near the fully flexed position. And movements like the biceps curl have a unique bell-shaped strength curve, which feels easiest at the endpoints and toughest in the middle.

Knowing the strength curve of the bench press allows you to selectively overload the movement along various parts of the ROM and apply techniques that challenge you at those sticking points. Get stronger at your weakest spots and improve strength where you’re already strongest – that’s the ticket to skyrocket your bench press.

1. USE CHAINS AND BANDS TO OVERLOAD THE TOP

Because the upper end of the range of motion is easier on the bench press, you’re not working that area as hard as you could be, which means you’re not realizing your full potential of muscle growth. The strategy here, then, is to increase the overload on the upper end of the ROM without significantly affecting the lower end. While you could do that with partial-rep training in a power rack (see tip 3), you can also try chains and bands in your chest workouts.

Bands are the more versatile choice because they can be used with almost any piece of equipment, but both training aids allow you to increase the overload the farther the bar is from the floor. Some hardcore gyms have chains, but bands are more practical for carrying around and come in various lengths and thicknesses, which can add up to 150 pounds of added resistance at the top of a movement.

Make sure you have a pair of bands to allow for symmetrical placement (important so the load is evenly placed on the bar) and ensure there’s a minimum level of tension when the bar is in the bottom position. You’ll also increase your negative-rep strength using these tools.

2. COME TO A FULL STOP AT THE BOTTOM OF EACH REP

You might not be the guy who bounces the barbell off his chest when benching, but that doesn’t mean you’re not otherwise getting a big assist out of the hole. To better understand the mechanism, let’s first have a quick physics discussion on the role of elastic energy.

Here’s how it works: When you lower a weighted barbell (without the bar touching your chest, of course), elastic energy builds up in the muscle, which assists in the initial stages of the lift when reversing direction. This process is known as the stretch reflex. If, instead, you stop the movement at the bottom of the rep for about two seconds (or, conversely, momentarily allow it to settle on the safety bars set to the bottom of your ROM just off your chest in a power rack), that aforementioned built-up energy dissipates. It can no longer help you out of the hole, which means you have to work harder to get the bar moving. That’s where a short-term dedicated training strategy can really help build up your strength out of the hole by making you work harder at your weakest point in the ROM.

There’s another way to overload the top portion of the rep where you’re strongest and that’s with partial reps. This can be done in a power rack in which you set the safeties so you’re only over a limited portion of the ROM, say the top third. This allows you to train with heavier loads than you could handle with full-range reps.

The idea behind doing heavy partials is that as you gain strength, you drop the safeties one or two positions in the power rack, so that you’re elongating the ROM. Over time, this allows you to push more weight over the entire strength curve of the bench press.

Board presses are another way to do partials, and they work in a similar fashion. While all heavy-weight movements should have a spotter, this one in particular requires your partner to hold one of two boards above just off your chest, again limiting the ROM to the top third or so. As you progress over time to using fewer boards, your range of motion increases until you approach doing full-range reps.

No doubt the triceps play a key role in heavy bench pressing, especially toward the lockout position. While your current arm workouts may be focused on generating a deep muscle pump, let’s put that training aside for a while and instead concentrate on building triceps strength. You don’t do that with high-rep, muscle-pump training.

Put a greater emphasis in your arm routine on multi-joint triceps exercises including close-grip bench presses, weighted bench dips, weighted parallel bar dips (for triceps, remember to keep your body in a more vertical position and don’t allow your elbows to flare out), as well as the triceps dip machine.

But don’t stop there. Choose challenging weights, doing as few as 4 to 6 reps per set, early in your arm training before fatigue sets in. With single-joint triceps exercises like skull-crushers and overhead extensions, let the rep target drift a bit higher, but you’ll still build strength better with sets of 8 reps than with sets of 15.

While bodybuilders and powerlifters use the same tools in the gym, their training methods are vastly different. To maximize strength as in the bench press, a number of training variables are altered from traditional bodybuilding protocol, including volume (the number of sets you do for a body part multiplied by the load), rest periods, training intensity (as defined by the loads you use in relation to your single-rep max, expressed as a percentage), and the concept of training to failure. Here’s a quick explanation:

>> To focus on gaining strength you typically use loads corresponding to, for example, your 5RM (that is, a weight you can do for five reps), 3RM and 2RM on your main (first) exercise, which for chest is the bench press. Such very heavy sets aren’t as effective at building muscle, but are requisite when focusing on strength.

>> When you increase intensity, you do not also want to increase volume. In fact, strength training involves far fewer total reps (usually about 10 to 20 total for all your working sets of bench presses) as well as fewer total sets in your workout. That is, after warm-ups, you may do four sets of benches, but the aggregate number of reps for all sets shouldn’t exceed 20 (four sets of five reps equals 20). When you get to even heavier weights, limit total reps to 10. That is, three sets of three, or four to five sets of two.

>> Workouts are arranged around building strength on a particular lift rather than building up a body part. Hence, the secondary exercises you choose after the bench should be ones that aid you in increasing your bench, not fully developing the muscle. Smart choices include dumbbell bench presses, incline presses, one of the techniques above that addresses a sticking point, and a multi-joint triceps exercise. These assistance exercises should be done for three to five sets, starting at the lower end and increasing volume over time, for four to six reps.

>> Between-sets recovery is usually about 60 to 90 seconds, bet when training for hypertrophy, but when following a strength-training protocol you don’t want any carryover fatigue from your previous set, which allows the nervous system to better recover. Hence, on your main exercise, take three to five minutes between sets.

>> Training to failure, the point at which you can’t do any more reps on your own with good form, is a bodybuilding technique that’s not used in strength training. In the latter, it’s counterproductive because of the cumulative stress it places on the nervous system. Always keep one to two reps left in the tank for each set. Have a spotter on hand but avoid forced reps.

All the above approaches can help you make incremental gains in chest strength in the gym that, over time, lead to significant changes in strength. But why limit your efforts to just training when science has shown eating right and smart supplementation can further boost strength gains? Here are the key supplements to consider to complement your training efforts.

>> Creatine Monohydrate. This musclebuilding, power-enhancing supplement has plenty of research to support its ergogenic role as a strength and size builder. Creatine works by increasing the availability of creatine and phosphocreatine (PCr) within the muscle, which helps you maintain energy during high-intensity activities like weightlifting. Research shows that creatine supplementation can lead to at least 5% to 15% greater gains in strength and performance.[1] Make use of these MuscleTech® products that include creatine: Cell-Tech™, Cell-Tech™ Hyper-Build™ and Essential Series Platinum 100% Creatine.

>> Whey Protein. Because it’s fast digesting, whey is optimal post-workout as it stimulates muscle protein synthesis rapidly compared to other types of protein such as casein.[2] A review article published in The American Journal of Clinical Nutrition showed that supplementing with protein for longer than six weeks when combined with  resistance training led to significantly greater increases in muscle mass and strength, when compared to resistance training without a dietary protein supplement.[3] What’s more, in a six-week clinical trial, subjects taking whey protein along with their training regimen gained 5.1 lbs. of lean muscle and added 14 lbs. to their bench press.[4] You can’t beat the Nitro-Tech® family when it comes to scientifically advanced whey proteins – and no matter what your goal, there’s a Nitro-Tech formula to help you get the results you’re after.

Some whey formulas also contain carbohydrates that are collectively known as mass gainers, ideal for a bulking phase. For those, you’ll want to consider
Mass-Tech® Extreme 2000.

> > Caffeine. As a stimulant, caffeine aids in both endurance activities as well as highly intense exercise. Caffeine is among the most studied ingredients in sports nutrition and can support increases in mental focus, intensity, energy and even thermogenesis.[5] Muscle-Tech features a wide range of cutting-edge pre-workouts that utilize this powerful ingredient.
Pre-Workout Collection

>> Branched Chain Amino Acids (BCAAs). BCAAs, especially leucine, stimulate muscle protein synthesis, suppress protein degradation and may help speed workout recovery. In a 2011 study, a 4 gram daily dose of L-leucine taken over 12 weeks, along with a training program, was shown to help subjects increase their 5-rep max lifts by over 40%.[6] Check out Amino Build Next Gen (with betaine and electrolytes) and Amino Build® Next Gen Energized (with added caffeine).